The Killer Strategy Behind Our User Onboarding Emails

This is the second of a two-part series that looks into the rules we broke and the risks we took to build out our new user onboarding emails at ProdPad.

You’ve built something you think is awesome, you want your users to feel the same way. So you set up some automated onboarding emails. Nailed it. You’ve picked a pretty template and it tells them what to do. So now all you need to do is sit back and watch the numbers go up. Right?

Nah. Users don’t tend to be as excited about email automations as you are. But here at ProdPad, our emails are doing something right.

People really like our automated user onboarding emails. They respond to them. They make complete strangers want to reach out to us.  They’ve helped us double our conversion rate.

These emails are on a mission.

They introduce our new trial users to ProdPad one action at a time and trigger the right messages for them based on their in-app behavior. Our onboarding emails get right to the point for every user, every time.

With the help of our data and Drip, we’ve reinvented what onboarding emails can do for our newest users – and for our bottom line.

How we designed “persona” emails

There’s a golden period during the time right after a user signs up for your new service. They’re still thinking about you and you’re in control of setting the tone of your new relationship. What kind of relationship will it be?

Ours starts with an onboarding narrative that tells you exactly what you need to take to be successful with ProdPad.

We did the groundwork first and redesigned our in-app dashboard to focus our onboarding experience around three primary actions that would make them more likely to convert.

We also introduced our magically extending free trial to reward users with more free trial time for completing a handful of key actions. 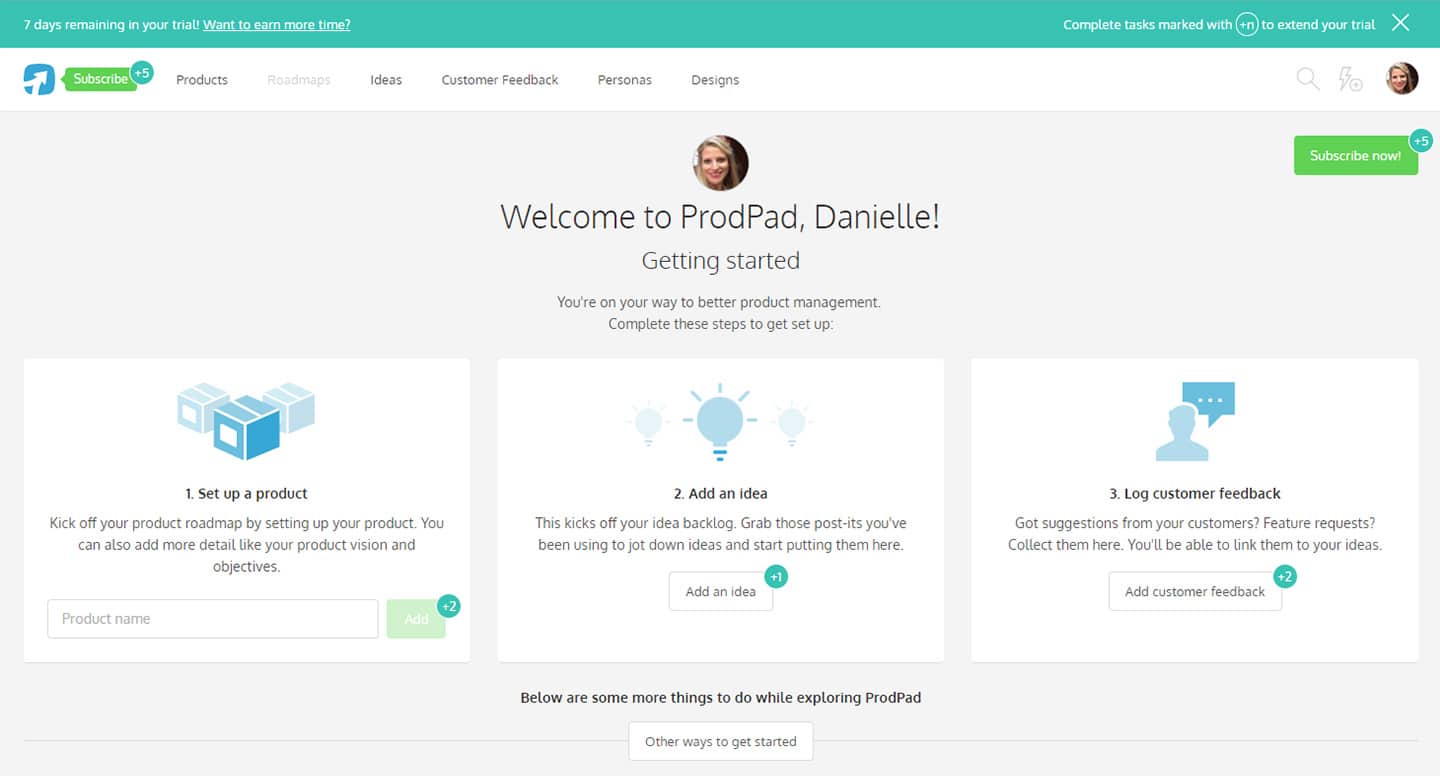 But our emails were in an existential crisis: a five-part “welcome” email sequence, hovering at a tragic 1% click-through rate. We could guess why.

Our app was walking users step-by-step through onboarding success, but our emails were just data-free stabs in the dark. What we needed to do was tie our emails into the same onboarding narrative we had built into in our app. So we decided to focus our emails around the same three actions we had set up in our dashboard (primary actions) and a handful of secondary actions that we knew would help boost our conversion rates too. We knew what we wanted our users to do, but how would we convince people to actually do them? Signing up for a free trial is not money in the bank, and the burden is still on us to motivate them to use it.

We had been tracking user behavior in ProdPad since Day 1, so we had data to tell us that we were dealing with wildly different levels of motivation. Using our data, we drew up three onboarding personas rooted in their behavior during the ten minutes after signup: Silent Shaun, Average Joe and Super Sally. 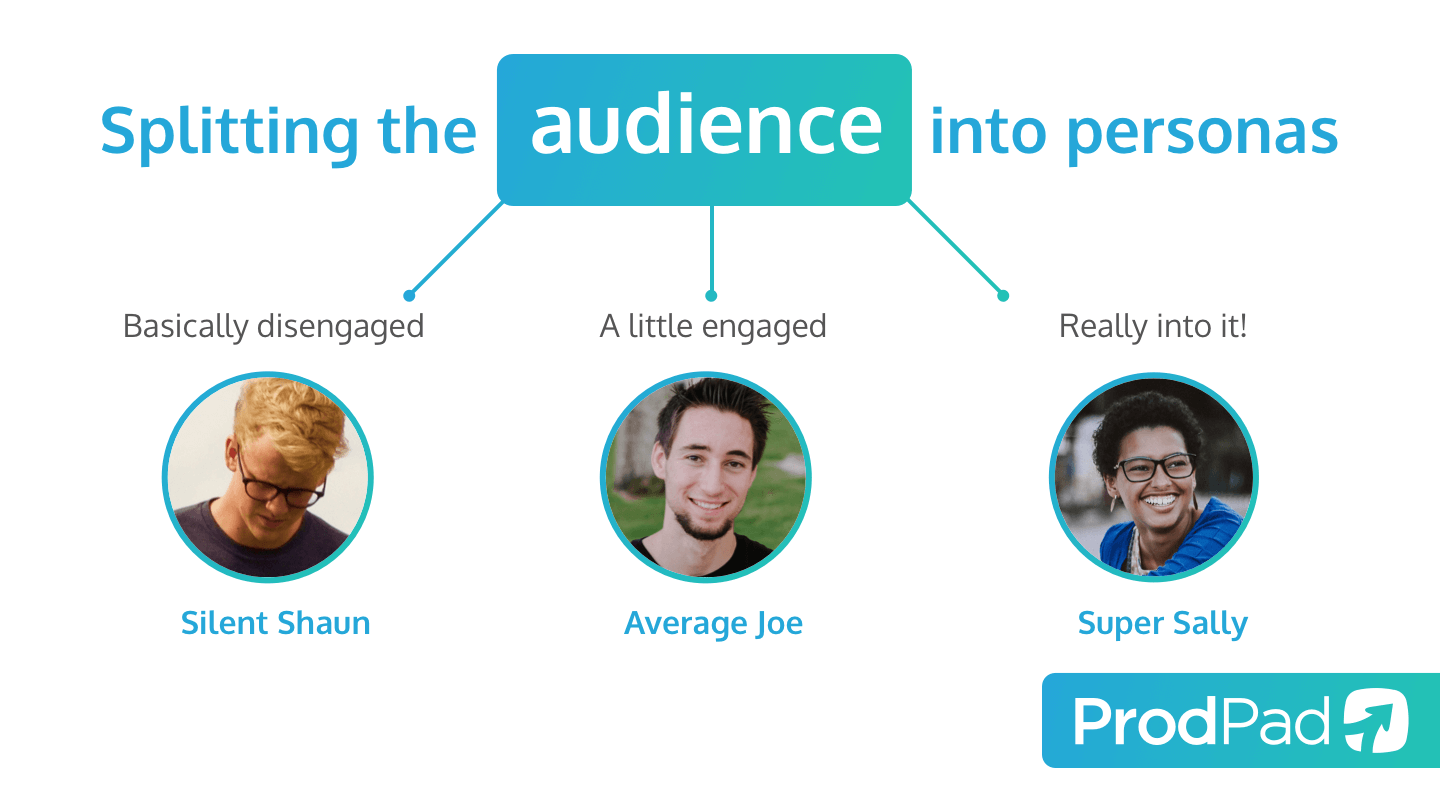 Our assumption was that Silent Shauns and Average Joes could be turned into Super Sally – if we pushed the right buttons. And we wanted more Super Sallys. Sallys were statistically more likely to turn into paid customers.

3. Set up a Drip workflow

Pushing the right buttons on our new users required us to assemble the most complicated email automation logic Drip that Drip’s customer support had ever seen. (We know because they told us.)

Drip integrated beautifully with our app, so we could set up emails to trigger in response to a user’s actions in ProdPad.

With Drip, we were able to put our first email on hold for the first 10 minutes – the time needed to determine whether we have a Shaun, Joe or Sally on our hands.

That 10-minute wait is worth it, because the very first email that lands in our inbox – and every email after that – signals to our users that our messages are tailored to them. 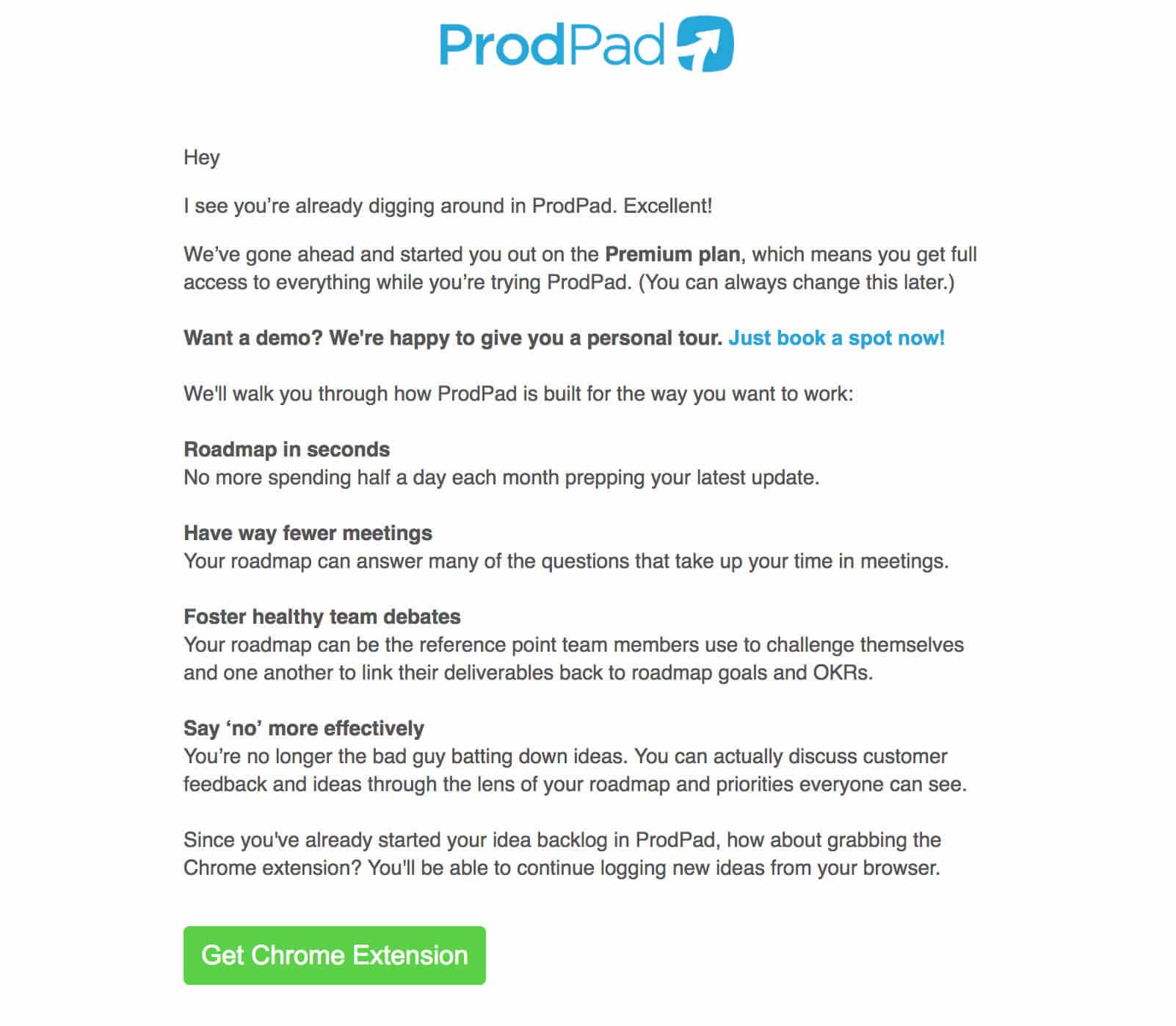 Every step after this runs a similar check: Did the user open and follow directions from the last email?

If so, great! Onto the next step. If not, we suggest something else or encourage behavior in a different way to encourage them back into the app where the same onboarding narrative is reinforced again.

If you take all the onboarding actions, great! You’re Super Sally. How about we get a little more advanced?

1. The power of gamification

Our magically extending free trial – free trial time for completing onboarding actions – was originally a feature in our product. But since it was an instant hit with our users, we found a way to tie in some of our emails to the good news and boost our engagement even more. 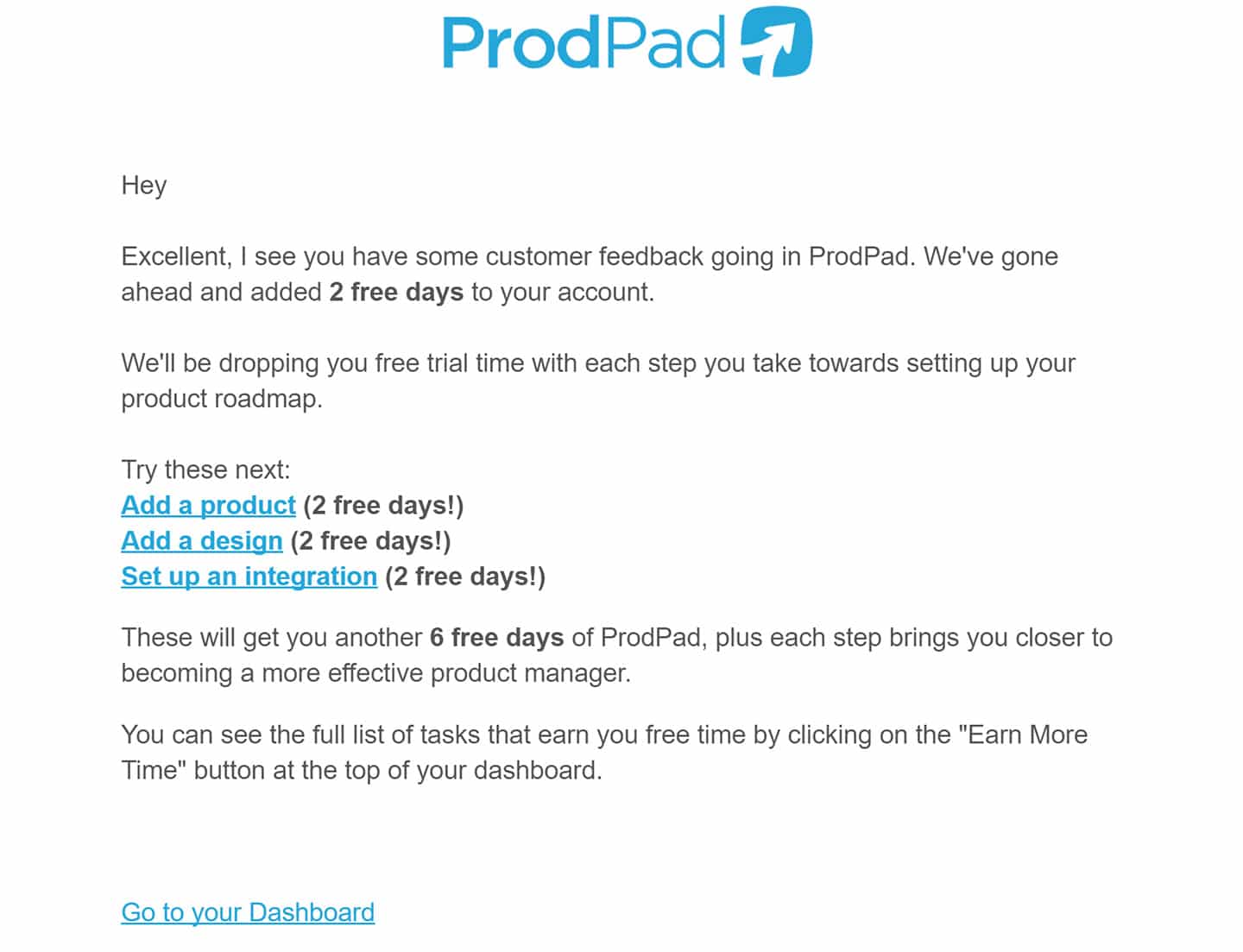 We designed these emails to give our users positive reinforcement and the drive to beat their own best score.

2. The power of taking just one action

There was something else that vastly improved our chances of converting a user: asking them to do just one thing. This is the first email that goes out to Silent Shaun, who has signed up for an account but done nothing else. Sure, it’s silly, but asking an unengaged user to do just one thing has worked. We’ve had people tell us they’re shaken, but they’ve survived their bear attack. They’ve also responded with questions about ProdPad, letting us know that they’re stuck. This email has helped us break the ice with users, book demos, schedule sales calls and show off our blazing fast customer support. Users who would never normally get in touch, email us back.

This has worked across the board for all types of users too. Single-action emails have allowed us to create a spectrum of messages without overwhelming our users.

There’s one last reason these emails seem to work so well for us. Email automation goes wrong when you expect it to pick up the slack for you. But with us? Our onboarding emails help us start the conversation, but we’re always there on the other end of the line.

Our onboarding emails are just the beginning – a taste of who we are as a brand and as a company – and a preview of what’s to come.

[…] look behind the curtain in a two-part series on their blog in 2017, sharing the vision behind their onboarding strategy and how they implemented […]

[…] not taken—whether it’s on your website, in your app, or in-person. ProdPad has an excellent case study on how they use in-app data to create personas and prompt people to take particular actions. It’s […]